Clearly, some form of standardization was necessary. This was achieved during World War II to a certain extent, although in the USA multiple companies still produced competing models rather than standardize on a competitor's product. In Britain the authorities enforced a standardized approach. Let's take a look at some of the turrets in common use during World War II before we describe the war experience of the air gunner.

We'll begin in the USA.

Consolidated Aircraft produced many successful turrets, including - oddly - a tail turret for the B Liberator that was sometimes mounted in the nose as well! The B tail "turret" was interesting, in that it was a two-piece design. The gunner sat in a fixed glass cupola and fired the machine-guns mounted below and behind him by remote control.

It was a difficult mechanism to develop, as the narrow tail of the B offered no room for a conventional turret. It had to be lengthened and adapted to provide space for one.

A description of the development of this unique design may be found here. A BG's tail turret is shown below. The Glenn L. Martin Company had some interesting designs. Their ball turret is shown in the final picture below installed in the nose of a Martin PBM Mariner flying-boat. It should be noted here that a "ball turret" is shaped as the name suggests, like a ball.

The gunner moves with the turret, so he can be in almost any position, including upside-down if the amount of turret travel allows for it! In a conventional turret, the turret turns in azimuth i. The ball turret was unique to US aircraft: the British stuck with more traditional turret arrangements. The Engineering and Research Corporation Erco produced an effective ball turret by improving on the Martin design.

The Emerson Electric Company became the world's largest manufacturer of aircraft armament during World War II, including producing aircraft gun turrets. The Grumman Aircraft Engineering Corporation produced a small ball turret, mounting a single. The turret was mounted at the rear of the glass enclosure for the crew, making it look like it was an extension of that compartment - although, in fact, it was a separate unit.

Bendix Corporation produced an upper turret that was fitted to the B Mitchell bomber and other aircraft. The Sperry Corporation produced the in famous retractable ball turret installed on B and B bombers. The turret was lowered from inside the fuselage to its operating position, and could be raised again when the need for its protection had passed. The gunner had to adopt a pretzel-like, almost foetal position to operate it.

This turret was regarded as a particularly hazardous assignment by air gunners, as if it were damaged in almost any position on its arc of movement, and rendered immobile, the gunner could not get out through the entrance hatch. This made it impossible for him to retrieve his parachute which could not be worn in the turret, due to lack of space and abandon the aircraft if necessary. Furthermore, if the turret or its lifting mechanism was so badly damaged that it could not be retracted into the fuselage, and if a belly-landing was necessary, the gunner inside the turret would certainly suffer a particularly gruesome death.

This happened at least once during World War II. There's also the story of the B "Carolina Queen", that could not retract its ball turret before a belly landing. In a wonderful display of flying, tools were lowered to the aircraft on a rope from another plane. The "Carolina Queen" then undid its ball turret and dropped it into the English Channel before making a safe belly-landing at its base.

The story and photographs may be found here. The aircraft is shown below after its safe landing. The recollections of another ball turret gunner may be found here. A detailed description of its operation is given here. Six miles from earth, loosed from its dream of life, I woke to black flak and the nightmare fighters. When I died they washed me out of the turret with a hose. Certainly, a solid hit on the turret would kill the unfortunate gunner inside.

The photograph below shows one that took a direct hit from a cannon shell. It was photographed after being 'washed out with a hose'. You can imagine for yourself the carnage within. However, a statistical study after the war showed that in reality, the ball gunner had the safest position in a bomber crew. The pilot was statistically the most likely to be injured or killed, with the other crew members not far behind. It was surmised that this was due to incoming fire from ahead or behind raking the length of the fuselage, hitting everyone in its path. However, the ball turret, in its lowered position, was below this line of fire.

The USAAF always envisaged daylight operations for its aircraft, and consequently wanted them to be as heavily armed as possible for their own defense.

It did not rely solely on turret-mounted guns, but also installed them in larger aircraft on pintle mounts in the waist, shooting out to either side. Beneath the diagram showing the layout of the waist guns are two photographs, the first of the B, the second of the B, showing waist gunners in position.

The B also employed single machine-guns in positions at the side of the nose, referred to as "cheek" mountings. These were of limited utility, as they could not fire directly ahead - there was no room inside the fuselage for the gunner to get behind the gun and aim them in that direction. Early models of the B were thus vulnerable to head-on attack, until the BG introduced a "chin" turret below the nose to cover this zone.

The photograph below shows the "chin" turret, with one of the "cheek" machine-guns visible above it. The famous PBY Catalina flying-boat also used waist guns, but these were mounted in so-called "blisters" extending beyond the hull. This permitted the gunners to fire them at more acute angles, and engage surface targets. The photographs below show these "blisters" and the mounting of the gun within them. This superb weapon proved well suited to the air-to-air role, and served throughout World War II.

The common idiomatic expression "The whole nine yards" actually refers to the length of the ammunition belt for the. It was eventually adopted by Britain as well, although never as a predominant weapon - in that country, the. It was considerably less powerful than the. Britain's reliance on the lighter, shorter-ranged and less effective. These could carry more of the smaller machine-guns than they could of the larger M2 or equivalent weapons, and volume of fire was considered particularly important by the RAF.

The early versions of its monoplane fighters, the Spitfire and the Hurricane , carried eight. By the end of the war the machine-guns had largely been supplanted by cannon as well, so that British fighters often mounted four 20mm. In its bombers, the RAF turned to the. This was influenced by three factors. First, the RAF's bombers flew at night. Its air gunners reported on numerous occasions that the maximum effective range at which they could see an enemy aircraft was about yards, well within the range of the.

The longer range of the. Second, wartime ammunition production in Britain was standardized on basic calibers. Their machine-guns for Army use were almost all in. To introduce a new caliber, requiring high-volume production, would have been difficult, particularly after Dunkirk, when Britain's Army had to be re-equipped virtually from the ground up. It made logistical sense to stay with the weaker, lighter caliber, simply because production facilities could be dedicated to it. Finally, the RAF attached great importance to the weight of bombs carried by their aircraft.

The USAAF found it acceptable that the B, for example, could carry only 2 to 3 tons of bombs on operations over Germany, plus one-and-a-half tons of ammunition for its machine-guns. The RAF wanted to maximize the bomb-load: its Lancaster bomber could carry up to 10 tons, and routinely carried 6 to 7 tons on operations.

Air gunners in the RAF bemoaned the lesser hitting power of the. Also, for special operations, RAF gunners would sometimes load a very high proportion of tracer rounds, making it look as if their guns were shooting cannon shells. One example of this occurred during Operation Chastise , the famous Dams Raid, when Wing-Commander Guy Gibson 's front and rear gunners used a heavy concentration of tracer ammunition, because they knew they'd be shooting at anti-aircraft guns on the wall of the Moehne Dam and wanted to scare the gunners. 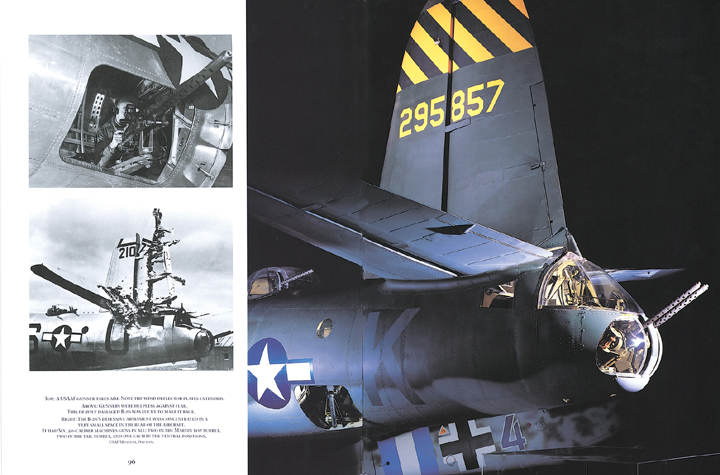 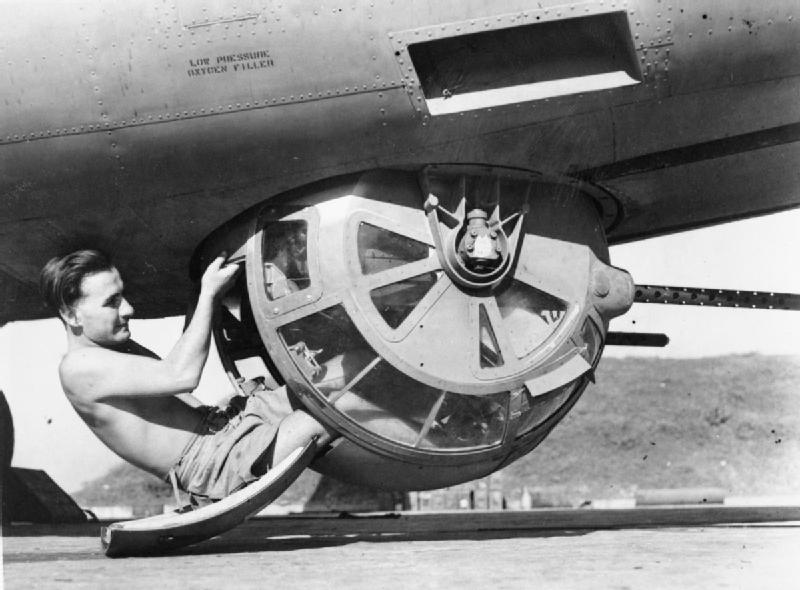 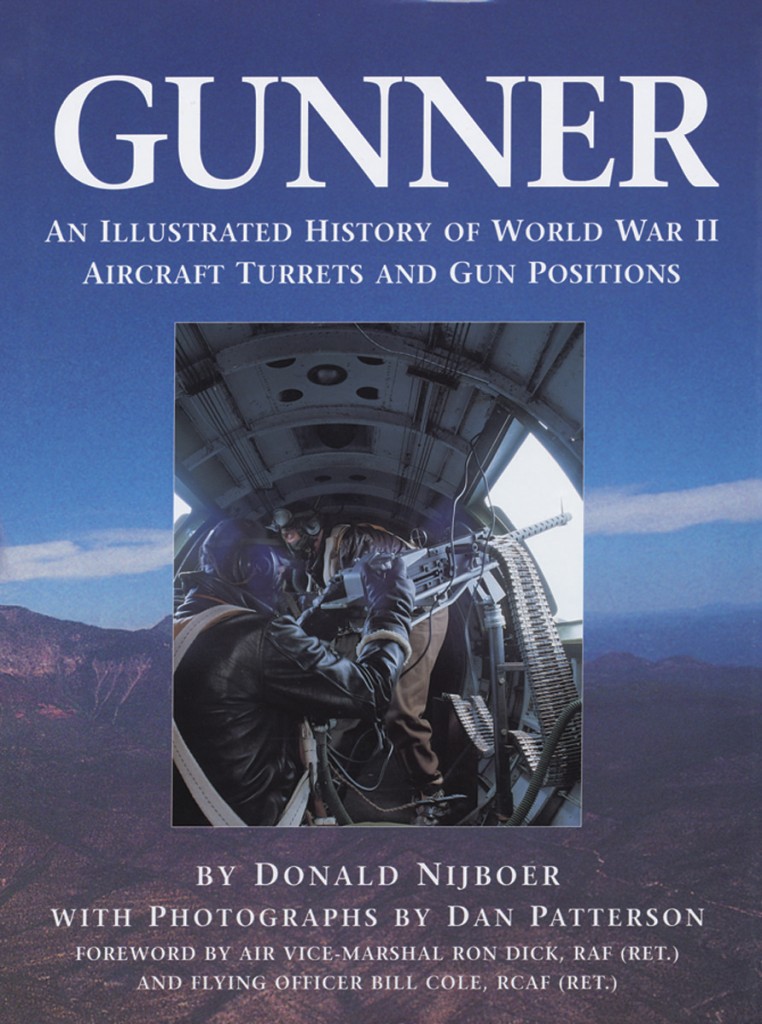