Philanthropy should reflect on what the history of eugenics has to teach us about the dangers posed by the grand projects that seek to drive down to the root causes of social problems and solve them once and for all. Our foundations should be willing to do no less. Very little has changed over the past hundred years in the basic structure of American foundations — the structure that does so much to shield large-scale philanthropy from the consequences of its own actions, including momentous errors like eugenics.

Once a foundation acquires legal status, for instance, no one beyond its own board of directors — which is typically quite small, upscale, and self-perpetuating — has much to say about its ends or means. Prescribed legal supervision by the IRS and by state attorneys general is at best pro forma. Furthermore, foundations utterly lack the feedback mechanisms that automatically reward or punish other social institutions for their behavior.

State of the Debate: Lessons of Right-Wing Philanthropy

Foundations do not have to answer to customers or shareholders, as do corporations, nor do they have to answer to voters, as do politicians. Although philanthropy currently professes to pursue more transparency and accountability than it used to have, it is entirely on terms established by foundation management. That is, philanthropy is more than willing to be accountable for all the wonderful things it is doing, which it describes in a stream of relentlessly upbeat press releases and glossy, grin-filled annual reports.

But rigorous, honest, hard-hitting journalistic accounts of foundation behavior — the sort of reporting we expect about every other major institution in America — are nearly nonexistent. Foundations remain almost hermetically sealed institutions, more or less impervious to the pressures that push and pull our other economic and political entities, and that make them ever mindful of the consequences of their decisions.


T he absence of feedback mechanisms is not the only feature that distances large foundations from public influence. Philanthropies have become ever more professionalized, stratified, and bureaucratic, disconnecting their leaders even further from the concrete social situations they seek to mold. Their programs are typically staffed by well-credentialed elites, drawn from the most affluent zip codes in the country. Given their social status and academic esteem, it is usually assumed that they are qualified to undertake the boldest and riskiest schemes of social engineering in the name of the global good; that they are able to see well beneath the superficial symptoms of social problems down to their first causes, where they can be fixed once and for all.

Somewhere far below this sunny upland, however, stands the average citizen, on whose behalf these bold social experiments will be made and in whose neighborhoods they will be carried out. Unhappily, that citizen often seems unable to appreciate the magnitude of the beneficence about to land in his backyard, given his lack of appropriate expertise, his entanglement in everyday, parochial concerns, and the petty moral and religious prejudices that may becloud his judgment. And every foundation knows how to translate that input into resounding community support.

If complaints do arise, foundations are tempted to tell themselves that one cannot expect much else from individuals who are able to experience and understand only the superficial symptoms of their own problems, attention to which was the old, discredited approach of charity. It is not difficult to understand how our philanthropic experts can, over time, lose sight of the fact that individuals are not just inadequately self-conscious bundles of pathologies but rather whole and worthy persons, possessed of an innate human dignity that demands respect no matter what problems they may suffer.

Once philanthropists have steeled themselves sufficiently to discount the dignity of the suffering person before them in order to pursue a good that the sufferer cannot be trusted to appreciate, they may conclude that the most merciful way to alleviate suffering is to prevent anyone from becoming a sufferer in the first place — by cutting off suffering at its supposed root. In the case of the eugenics movement, the search for root causes apparently led many philanthropists to conclude that some lives of suffering ought not to have been lived at all.

At a moment when we need more than ever to grapple with the subtle moral pitfalls of genetics-driven, root-causes philanthropy, our oldest foundations fail to take seriously their own mistakes. More fundamentally, they seem to ignore that the structure of their organizations, closed off as they are from public input and from the suffering individual himself, provides the conditions that too easily can give rise to the kind of philanthropy that ultimately tears down, rather than builds up, the individual.

Rather, we are imperfect human beings called to compassion and charitable care for other imperfect human beings. There will always be loneliness. There will always be situations of material need where help in the form of concrete love of neighbor is indispensable. That loving personal concern is at the heart of charity traditionally understood. It can only be practiced immediately and concretely, within the small, face-to-face communities that Tocqueville understood to be essential to American self-government. There, the seemingly minor and parochial concerns of everyday citizens are taken seriously and treated with respect, rather than being dismissed as insufficiently self-conscious emanations of deeper problems that only the philanthropic experts can grasp.

Greater collaboration among individual charities, especially as an attempt to avoid abuse of alms, was indeed a worthwhile goal. But central to the COS movement was also a scathing critique of old-fashioned, unscientific charity as ineffective and duplicative, more likely to produce dependency than to solve problems. Initially, and not illogically, the Catholic Church viewed this as an attack on the vast network of institutions — workhouses, hospitals, orphanages, and schools — that it had built up in America.

Where American Catholicism saw a rich and diverse array of charitable endeavors reflecting every vocation, every need, every tongue, every ethnicity within its swelling ranks, the COS movement saw only waste and redundancy, encouraging rather than curbing poverty — a view later shared by the first major foundations. Eventually, various Catholic leaders joined local Charity Organization Societies in the interest of neighborly unity with others in a common cause and for the greater benefit of the poor.


Historian Benjamin Soskis completed a doctoral dissertation in that brings to light the little-known Catholic charitable counter-movement against centralized professional philanthropy. As Soskis points out, the Catholic Church refused to abandon direct, immediate, voluntary ministry to individual sufferers, or to treat them as bundles of pathology. Consequently, they worried less about the problem of indiscriminate charity or the specter of pauperism and more about the spiritual damage done to the giver by hard-heartedness or the erosion of sympathy by the forces of centralization and bureaucratization.

It is to the eternal credit of the Catholic Church that, almost alone among the major cultural institutions of the early twentieth century, it refused to yield to the scientific siren call of eugenics.

He condemns those who. And more, they wish to legislate to deprive these of that natural faculty by medical action despite their unwillingness; and this they do not propose as an infliction of grave punishment under the authority of the state for a crime committed, not to prevent future crimes by guilty persons, but against every right and good they wish the civil authority to arrogate to itself a power over a faculty which it never had and can never legitimately possess. Of course, this sentiment was not shared universally among religious communities, nor even among American Christians; far too many Protestant churches at the time were embracing eugenics as a cutting-edge, scientific way to help establish heaven on earth, as Christine Rosen points out in her fine book Preaching Eugenics Although many Catholic charitable institutions today have become every bit as professionalized and bureaucratized as their Protestant and secular counterparts, others still reflect the traditional understanding of immediate, face-to-face charity.

He had no clear plans for how to help these two; he was just going to live in communion with them. But instead of being focused on changing them, he soon realized that they had something to offer to him that would begin to transform him, revealing his own pains and limitations and the fundamental human need for friendship. From there, the model spread and there are now over such communities around the world.

Charity, Philanthropy, and Civility in American History | Reviews in History

Nor does it mean fixing them by getting to the root causes of their problems. They will call us to be people of mutual trust, to take time to listen and be with each other. They will call us out of our individualism and need for power into belonging to each other and being open to others. Nouwen had achieved international renown as a prolific writer and intellectual at Notre Dame, Yale, Harvard, and in his native Holland. Adam suffered from severe disabilities, including frequent epileptic seizures, and was unable to speak, feed himself, or get about on his own.

And yet, here was Henri Nouwen, bathing him, brushing his teeth, and helping him lift his spoon to his mouth each morning. Rather, Adam was — in his utter stillness and silence, in the watchful, holy presence he maintained at the heart of the community — a masterful teacher of patience, compassion, and communal solidarity. To some of us, it may even sound like mystical nonsense.

Does Philanthrocapitalism Make the Rich Richer and the Poor Poorer?

But even if we leave overt Christianity out of this account, can we not see that Vanier and Nouwen point us toward a humane alternative to the cold, technocratic rationality of much modern philanthropy? True charity and its embodiment in community may not be just retrograde and ineffective remnants of a previous age. Outsiders, strangers, the poor, and those with disabilities possess an innate human dignity that demands respect, not circumvention. The wisdom of the heart may be able to penetrate to the root cause of suffering in a way that reason never can.

W ould it be possible for a foundation to take its bearings from this understanding of charity rather than the mainstream assumptions of scientific philanthropy?


Rockefeller and Andrew Carnegie. Nor is it clear how large foundations would make the best use of their resources in a model of face-to-face charity. But the good news about American philanthropy is that there are some , foundations in America, most of which are actually quite small. They are often managed by family members or friends of the original donor.

A great many of them are governed by charters that limit their giving to a particular city or state.

Such limitations of size and scope may disqualify small foundations from root-cause aspirations but make them ideal vehicles for a genuinely charitable philanthropy. As I discovered during my own years with a foundation in Milwaukee, small charities are everywhere, even in the most distressed and unlikely locales. In battered storefronts, in old fraternal halls, on litter-strewn street corners, they draw the least of these into proud, powerful communities to battle addiction and prostitution, street crime and youth gangs, unemployment and depression.

They are treated rather as whole human beings with the responsibility and capability to understand their own problems, and the wisdom to help devise solutions to them. In order to locate and provide proper support for these kinds of communities, grant-makers need to be far more humble and receptive than many of the most celebrated philanthropists have been. For these groups do not have glossy brochures or slick annual reports or dashboards of metrics enumerating outcomes to the third decimal. 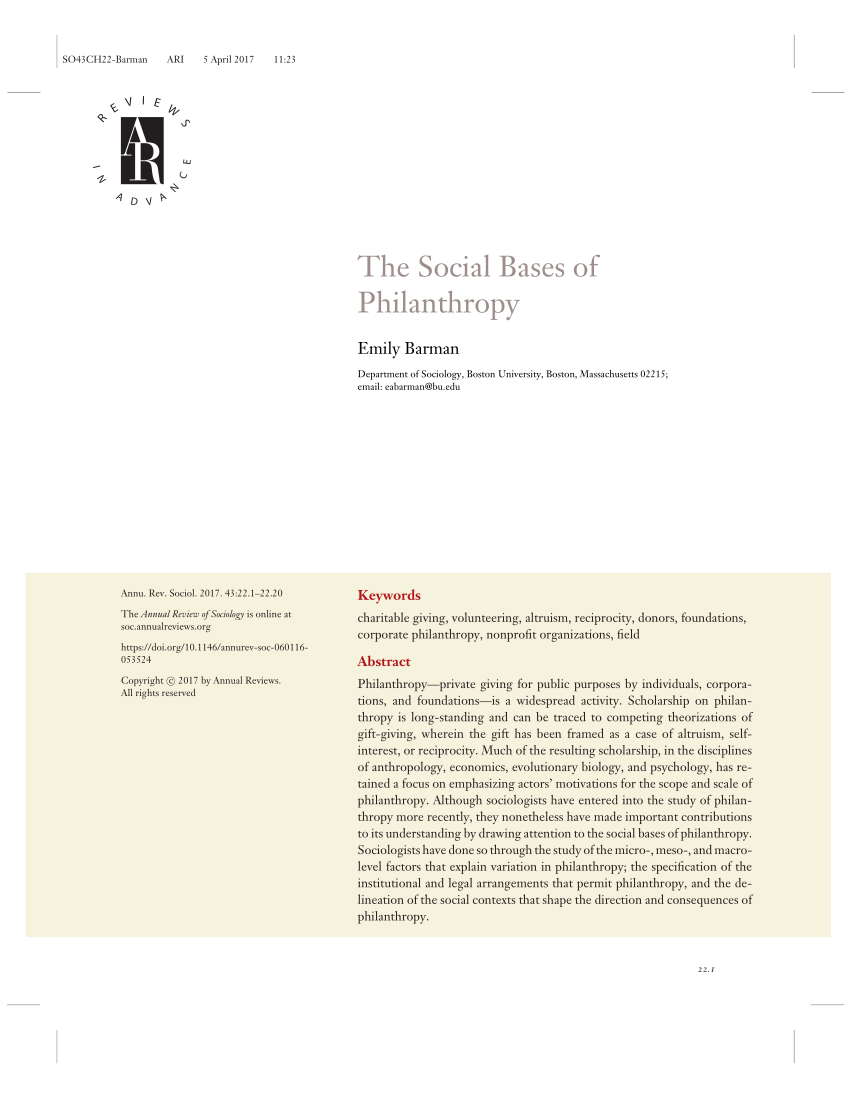 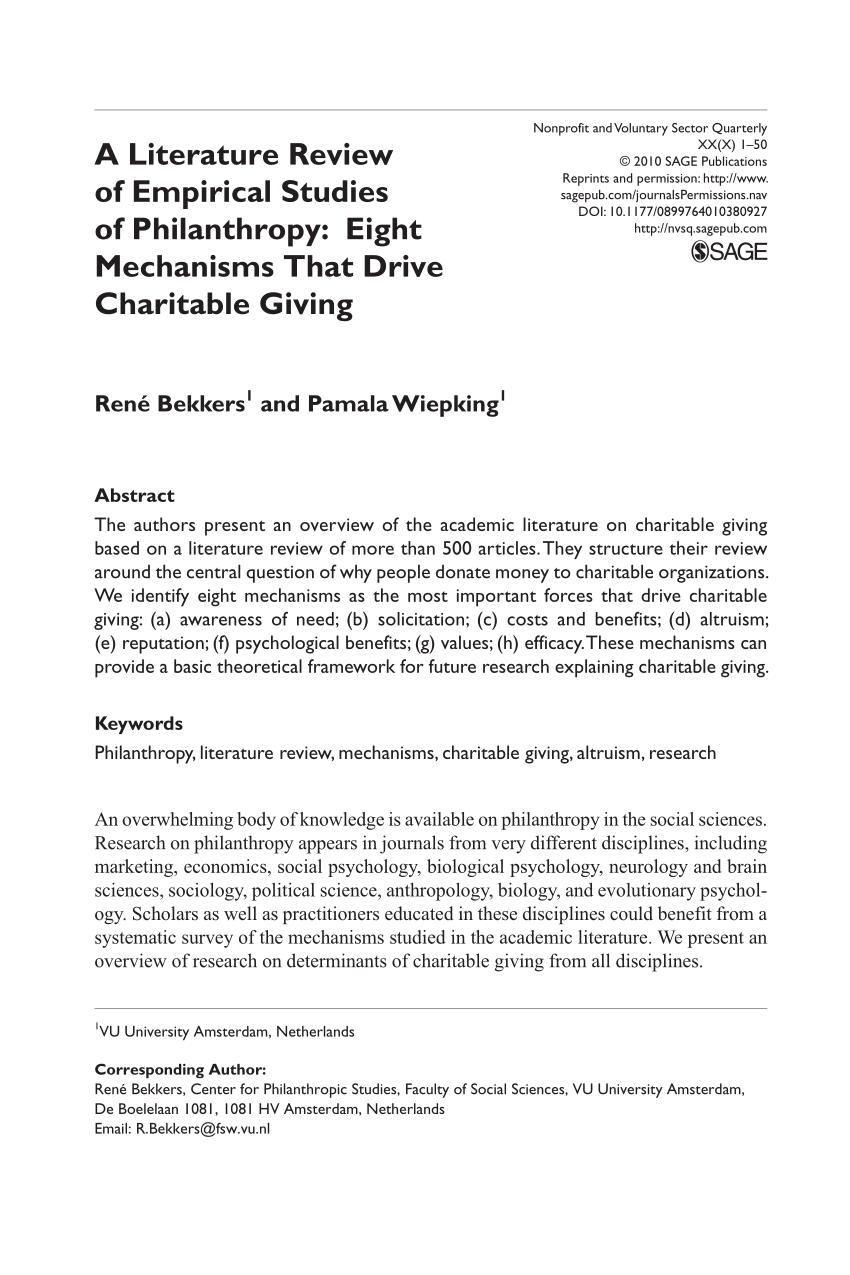